Na Sboru house is one of the memorable places in our country, because the first church of the Bohemian Brethren was established here in 1457. You can find exhibition related to the foundation and history of the Brethren here.

Educational trail “In the wake of the Bohemian Brethren” leads from the house through Modlivý důl and Jordán all the way to Brethren lime tree and the place where their blacksmith’s shop used to stand.

From the history of the Bohemian Brethren

At that time, i.e. in the second half of the 15th century, after the Hussite Wars (view of the House from the gate) and during the reign of George of Poděbrady a number of religious sects and movements emerged, looking for a way out of the general moral decline. There were Valden, Vilémov and Tábor communities, to name a few. A group of believers was also formed in Prague, led by brother Gregor, following the teachings of Petr Chelčický, gathering under the pulpit of Calixtine priest and Prague archbishop Jan Rokycana. He interceded with king George for the group, which was given a place in the royal manor of Litice, in the middle of the woods, in the village of Kunvald, destroyed by the wars. Michal, priest from Žamberk, became the administrator. He moved to Kunvald for good in 1459. The Brethren built themselves a wooden church here, and called it the Body. The building was their place of worship for the following nine decades. New bodies of believers were established in many villages around – under the influence of Kunvald Brethren. These bodies were the fundament of a new church, the Bohemian Brethren, whose first bishop was elected: Matthew, son of a yeoman from Kunvald. After the death of king George Litice manor was acquired by William II of Pernstein, supporter of the Bohemian Brethren, in 1495. (One of the books of the Bible of Kralice) Later, when Ferdinand I, Holy Roman Emperor acceded to the throne, Czech estates opposed him, namely the Brethren-supporting nobility. The emperor suppressed the resistance movement, expelled the Brethren from royal towns, and ordered the Bodies to be closed. Grandson of sir William Jaroslav of Pernstein issued a writ in 1541, banishing the Brethren from his domains and closing the little church in Kunvald.
The Bohemian Brethren have been persecuted for the most part of their history. Better times came with Rudolf II, Holy Roman Emperor, albeit only for a short period. His Letter of Majesty guaranteed religious freedom, and some formerly evicted Brethren came back to renew the Bodies.
However, after the Battle of White Mountain in 1620 the Bohemian Brethren were prohibited again. Only Catholic Church was allowed in Bohemia, and all the non-Catholic scholars had to leave the country, too. John Amos Comenius, the last bishop of the Bohemian Brethren, was one of them.
Work of the Bohemian Brethren members was very important. They translated the Bible from Hebrew and Greek to Czech language. This first Czech six-tome scripture was printed in the Brethren’s printing works in the Moravian town of Kralice. The language of the Bible of Kralice was later adopted by J.A. Comenius as a basis for standard Czech.
The church in Kunvald was rebuilt by the Brethren two years before the Battle of White Mountain (present exhibition) After the battle it was used as catholic school till 1750, when new school building was commissioned. Subsequently the house was sold. The Evangelical Church of Czech Brethren purchased the property in 1929, and made it a monument to the Bohemian Brethren. Last major reconstruction took place in 1991, when the little house was reopened on the occasion of the 400th anniversary of the birth of J.A. Comenius.

There are other places in Kunvald, commemorating the Brethren activities: Lime tree that grew from three twigs planted here when the Brethren were leaving their homeland. Place called Jordán, where there was a spring used to baptise new members. Modlivý důl, where the Brethren gathered for services in times of oppression. Monument to J.A. Comenius (by sculptor O. Fiedler from Žamberk from 1910) stands on former burial ground, and Brethren blacksmith’s shop, where the first bishop of the Bohemian Brethren grew up. Today farmstead of Mr. Zářecký can be found here. 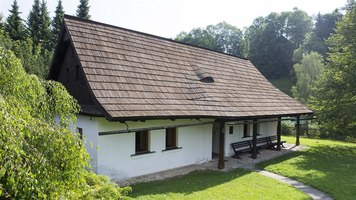 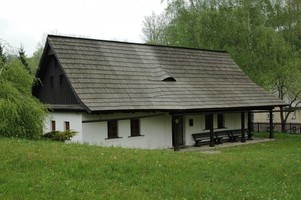 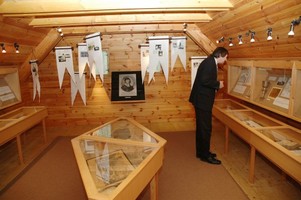 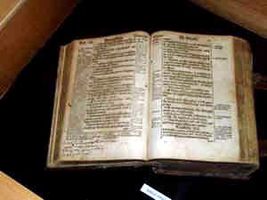 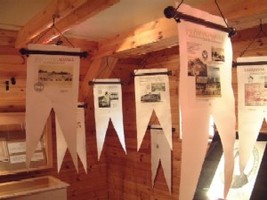