The original church was built probably in the 14th century in the middle of the lower graveyard, to the northwest from the present church. A smaller cross stands there today. The former structure was damaged by windstorm around 1600. The wood was sold and used to build the original farmstead no. 147.

New church was built from bricks in 1605 where the present building is. The former now makes the rear half of the present church and presbytery. It was rebuilt and renovated in 1746-1747, in Baroque period.

Stations of the cross by Johann Franz Greippel, painter from Vienna, were installed here in 1780. The altar painting of St. George from 1783 was made by the same author. There are sculptures of St. John of Nepomuk, and St. Adalbert by A. Ciliák, and of St. Joseph, Virgin Mary of Lourdes and nativity scene by sculptor Purger of Groden at the altar. The church was consecrated to St. George. Remains of the saint were brought from Rome in 1846 by JUDr. Martin Maxmilián Štefek.

The church was too small for the township at the beginning of the 19th century, therefore nave with four windows and new tower were added in 1831-1833. The height of the tower was increased in 1900-1901 to the current 29 m.

Three bells were hung: the big one called „gross” from 1752 cracked, and had to be re-cast. The new bell was 72 cm high, diameter 94 cm, ornamented above the inscription. It was confiscated for the military purposes in 1916, like many other bells.

The medium bell called „Poledník” (“Midday”) was made in the 15th century, i.e. In times of the Bohemian Brethren in Kunvald. It is said to have been brought here from the original church. Gothic inscription can be found here, translated to modern Czech language: „I am the voice calling, come unto me both, you good people and you sinners, here onto the house of the Lord, from afar, too”.. The bell’s name is now used symbolically in the name of the local bimonthly: Kunvaldský poledník, successor of Kunvaldský zpravodaj, first issued on 6 December 1991.

The original smallest „death bell” fell in 1852, when it called believers for All Souls’ day procession, and was broken in three pieces. New bell was cast in 1858, and it was confiscated by the military in 1916.

Large sculptural group Calvary stands in front of the church. It was made by Alex Ciliák in 1771. An interesting element can be found on the pedestal – little metal cross to be kissed by devout people, unusual for pieces like this one. 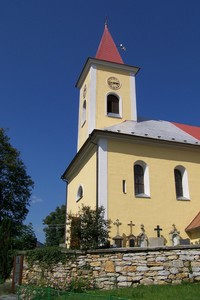 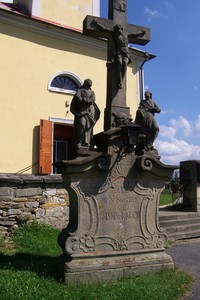 Church of St. George
Back to overview