Small chapel stands by a spring called Hungry Water, in the woods under Kunačice. Little pillar with Virgin Mary statue stood here from 1823.  Cottager Jan Hötzel from Kunvald commissioned it; he was a pious man, who called the piece “Purification of Virgin Mary”.

He was an enterprising guy, too, walking far and wide, inviting people for a pilgrimage to the Hungry Water that was said to have some healing properties. And he succeeded – processions were coming here from all directions, even from Polish Kłodzko.

Jan Hötzel hung stations of the cross paintings here, and established sort of basic spa resort. However, he also offered spirits and snacks. Sometimes merry pilgrims desecrated the place, which finally reached the ear of the local priest, and the episcopal consistory ordered closing of the spa with refreshments.

Jan Hötzel died a poor man, allegedly on the very Day of Purification of Virgin Mary.

According to legends, Kunaberg castle founded by a knight Kuna used to stand between Kunačice and Zaječiny, opposite Hungry Water spring, above the left bank of Horský creek, on a massive promontory. Kuna is supposed to have given his name to Kunvald and Kunačice, too.

There is no written record of the name, it is probably just a made up folk tale, motivated by the need to explain the names Kunvald and Kunačice. There are no written records of a local castle or a keep, either.

Currently there are no traces of ramparts or battlements, yet remnants of walls could be seen in mid-19th century. One of the local forest tracks used to be called “Castle”. This local name is not used anymore, though. If there was any structure, it was probably the residence of the first lords of Kunvald (strategic position), or a fortification protecting the border nearby.

According to G. Sommer a large manor house used to be in Kunačice. However, there is no evidence. The village was established later (first records from 1720), so an existence of a medieval manor is highly unlikely. 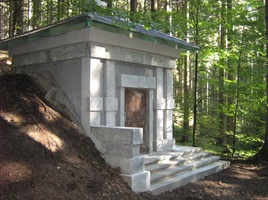 Hungry Water
Back to overview