Introduction > Guide for Visitors > Places of Interest > Monument to J. A. Comenius

Monument to J. A. Comenius

The monument to John Amos Comenius was built behind the Na Sboru house on the spot where former burial ground of the Bohemian Brethren had been located. It was unveiled on 24. 7. 1910 to commemorate the Bohemian Brethren, but namely to pay honour to J.A. Comenius, the last bishop.

Major celebration was organized on that day in Kunvald, with festival programme. A number of worthies were invited on the occasion, for instance Japanese ambassador. You can read some of the speeches in the above-mentioned Memorial book, which was first opened on that day. (Unveiling of the Chronicle)

The author was sculptor S. Fiedler, who made it according to the design by J. Strachovský from Hořice sandstone. The project had been initiated by local active citizens.

The pedestal bears inscription: "John Amos Comenius (1592 - 1670) was the first to say that everybody shall learn everything in their mother tongue. He promoted school to a humanity workshop. He showed how to switch on the light of reason in his didactics.” 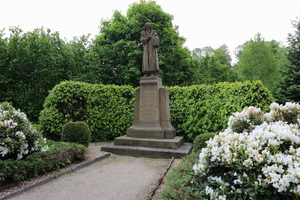 Monument to J. A. Comenius
Back to overview