The first small school was founded by the Bohemian Brethren in the aforementioned house Na Sboru. After the Battle of white Mountain it was used as Catholic school till 1750, when new school was built at the cost of count Adam Vít of Bubno, on the site of present no. 17 at the end of lime tree alley leading from the church towards Bartošovice. Third building of the kind, this time two-class school was built in the same place by the same lord in 1788. The fourth school with three forms was established in 1836, and reconstructed and extended in 1884.

A new, modern and timeless building was ceremoniously opened in 1930, and it still is one of the most important structures in the township.

When it was commissioned, it represented state-of-the-art architecture in the region. Perhaps we should add it was completed in mere 15 months.

The project was developed by architect František Cuc. Mužík company was contracted for the construction works, and local builder František Vítek was engaged. The foundation stone was laid on 2 June 1929, and lessons started in the building on 7 September 1930.

It was named after T.G. Masaryk, renamed in the 1950s to J.A. |Comenius, which did not diminish the goodwill of the institution. Yet majority of local population decided to give the school its former name in 1990: Elementary school of T. G. Masaryk. 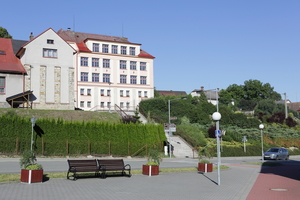 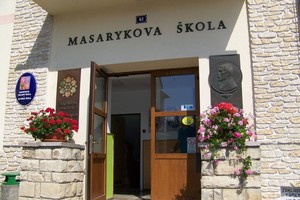 School
Back to overview