The history of Sokol hall is related to the establishment of the Firefighting/gymnastic union Sokol in 1882.

Sokol separated itself from the Firefighters’ union in February 1919. Important citizen František Frič (living in no. 290) donated a land to the Gymnastic union of Sokol, and his son Josef Frič (adventurer and millionaire who finally died in a poorhouse) gave 50 thousand koruna for building works.

The construction started in October 1920. Plans were developed and works managed again by Fr. Vítek completely free of charge. The gymnasium was opened at a ceremony in 1922.

It has served many generations of Kunvald children and adults alike as a gym and the only spacious venue for sports, culture and social events ever since.

The building is owned by TJ Sokol Kunvald. 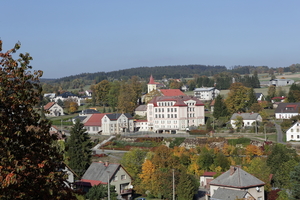 Sokol Gymnasium
Back to overview