Introduction > Guide for Visitors > Places of Interest > Statue of St. John of Nepomuk

Statue of St. John of Nepomuk

Not far from the above-.mentioned Border Cross there is the statue of Baroque saint John of Nepomuk. It was commissioned by Fr. Bílek from Lower Kunvald with the sculptor Ciliák in 1798. An unknown vandal broke off the head with its typical stars in a halo in 1920.

The head got lost, and the statue stood there without it for a long time. The saint was restored and repaired – including the head – only in 2006 by Marie Kudrnka Vamberská from Pardubice.
There are three statues of St. John of Nepomuk in Kunvald. The second by the same author (Ciliák) from 1752 is located at the bridge opposite the house no. 16 (former Junek smithy), and the third (from 1716) near the farmstead no. 137. 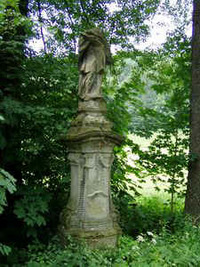 Statue of St. John of Nepomuk
Back to overview