Introduction > Guide for Visitors > Places of Interest > Statue of St. of Nepomuk at no. 137

Next to the house no. 137 statue of St. John of Nepomuk was built in 1716 (interestingly, back then he was not sanctified yet),and four linden trees were planted around. Three of them are still there, the fourth has been replaced with a young tree.

According to a local legend the statue was commissioned by Martin Lyer, the then owner of the farmstead, to commemorate his lucky escape (he had been caught by Jews and imprisoned in Josefov Jewish quarters in Prague). He was truly scared, and prayed to his patron John of Nepomuk. The saint appeared, led him out of the prison, and saved his life.

On the site of today’s farmstead no. 137 (“St. John Farmstead”) there was allegedly a blacksmith shop of the Bohemian Brethren. It is said the first Brethren bishop – Matthew of Kunvald – grew up here.

The current owners and descendants of Martin Lyer (Zářecký family) take good care of the statue with balustrade and the trees that were on 9. 11. 1994 entered in the list of protected plants, and organized a celebration to commemorate 300th anniversary in 2016.

In the spring of 2019 hurricane Herwart damaged considerably one of the trees, and only thanks to the protective elements there was no damage to the statue of John of Nepomuk. The trunk had to be reduced and cut for safety reasons. 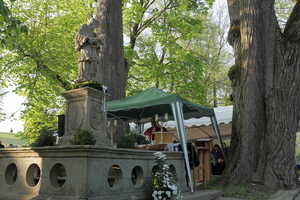 Statue of St. of Nepomuk at no. 137
Back to overview